Pre-releasing in the Forgotten Realms

It's that time again! After over a year (and five set releases) we get to hold an in person pre-release, with a couple of rules still in place. For those of you who've not taken part in a pre-release event before I'm hoping this will act as a suitable primer to answer your questions and give you a general idea of what to do.

The fundemental rules of a pre-release fall into a catagory of Magic often referred to as 'limited' meaning you have access to a limited card pool with which to build your deck. The practical applications of this is that you don't actually need to own any cards before you turn up, you'll be given a pre-release kit which will contain booster packs which you'll use to build your deck. Athena will also be providing basic lands to use for the event.

After opening all your new fancy cardboard you'll be confronted with a choice, what to build? The end goal is to build a 40 card deck out of the cards you open, with roughly 17 land and 23 spells (spells in this case meaning non-land cards) with the breakdown of spells varying slightly depending on the cards you open. As a basic rule you'll want somewhere in the region of 16 creatures, as these are the primary way to win games of limited. The other cards will be dictated by the cards you open, often consisting of removal (ways to interact with your opponents creatures) and combat tricks (ways to make your creatures bigger or your opponents creatures smaller inside of combat to make any potential blocks go in your favour).

Now you know what you want your deck to look like, you need to choose what cards to use. My preferred method involves splitting all of the cards into their own colour piles (usually while I'm opening the packs). This will give a pretty good idea of which colours you have more cards in, you can even rule out colours in this step if you don't have enough to make a deck out of. The next step is to search out your rares and mulit-coloured uncommons. Rares and Mythics are likely to be your best cards, often being powerful enough to win a game by themselves. Multi-colour uncommons are a little different, although they do tend to be the more powerful uncommons in the set.

The reason to search these out is that they are often the 'pay off' cards associated with the limited archetype in those colours. To break that down a bit each set will outline a number of recomended strategies for limtied play broken down into colour combinations. 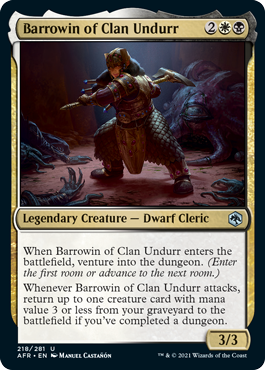 Using this set as an example the Black-White limited archetype is 'Venture into the Dungeon' highlighted by Barrowin of Clan Undurr who encourages you to complete a dungeon to gain an additional effect. Buidling your deck to match one of these archetypes is a really good way to make sure you are taking advantage of all the potential tools you have available to you.

In many limited formats its correct to stick to two colours, this will also make deckbuilding significantly easier. However in a few formats you have the ability to 'splash' a third colour (meaning add in a few mana sources, usually that make one of your main colours as well, to enable you to play a few really good cards in what would be your third best colour). While I usually suggest sticking to two colours this set does have a high number of cards which produce treasure tokens; the result of this is that if you have a high number of treasure producers, you should be able to 'splash' a card if you really want to.

Now that you know what colours you want to play the hard bit begins. You'll have to narrow down all the cards in those colours to form a deck. The best way to do this is to arrange your cards in order of mana value, from the cheapest card to the most expensive card. This will give you a rough idea of your 'mana curve'. It's usually best to have a few cards at one and two mana, a few cards at five plus and have the majority of your cards fall somewhere inbetween. Having too many 'low-curve' cards will mean that you may not be equipped with the necessary cards once the game get into the later stages, as your opponent will have larger creatures and more powerful spells. Filling your deck with 'high-curve' cards will mean that you're not able to play enough cards in the early stages and may get run over by an aggressive draw from your opponent.

And it's a simple as that, you should now have a deck with which to destroy your enemies, be that through rolling all the dice, venturing deep into various dungeons or just punching them with dragons. Which ever way you're cards take you remember that you will be at the same level as all your opponents, just remember to read all the cards (they're new to everyone after all), if you do have any questions or problems call over a staff member (we don't bite) and most importantly enjoy yourself! See you at the weekend!